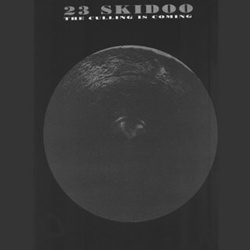 BOTH OF these docile records stand or fall as assemblages: their creators propose to be organisers of sound, something more than itinerant pop musicians. ...

I DON'T KNOW whether it was the film of African boys being circumcised or the self-important and gimmicky drone that accompanied it, but back in ...

THE THOUGHT was: as a concise introduction into the idea of 23 Skidoo I would write a short piece about Fritz Hamaan. ...

Before their drums fell silent, 23 Skidoo’s percussion-heavy apocalypses ripped away the city’s civilised surface to reveal its primitive heart. Now the long wait is ...