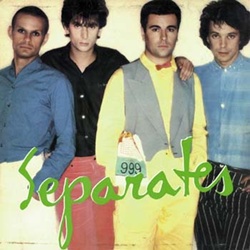 The Saints, 999: The Nashville, London

THERE IS A TEMPTATION to regard The Saints as comic. This stems from a number of idiosyncratic things about them, not least of which is ...

Is Gaye Well Equipped? Will These Boys Show You Their Equipment?

How easy is it to start your own band? How much does it cost? Rosalind Russell looks at 999's equipment and goes round the shops ...

999 ARE A heavy-pop quartet signed favourably to United Artists. They are, in effect, on the verge of some kind of breakthrough. A likeable bunch ...

I WOULD HAVE LAUGHED at you for saying as much to me before, but Liverpool, with all its cool, uninspiring streets and grey sky has ...

AND YES, this unfortunately is where it separates. 999's second album – always a fateful thing – and the illusory packaging hides a regression. ...

A state of emergency ...

999: Feelin' Alright With the Crew

ANYONE WHO SEES more than one rock show a year knows that a lot of the glitter wears off after the first few times. Which ...

Retrospective by Dave Thompson, Goldmine, 17 May 2006

THE ODD thing about the history of punk is, it's very easy to forget some of its best progenitors. ...