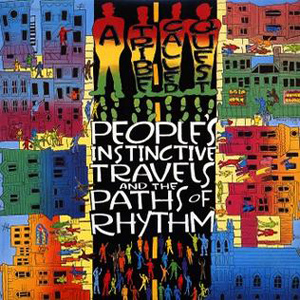 THEY TROOP into the hotel foyer. The New Soldiers Of Rap are jet lagged from eight hours on a plane but the assault on Britain ...

A Tribe Called Quest: People's Instinctive Travels and the Paths of Rhythm ***

INASMUCH AS THE arch and arty New York hip-hop foursome A Tribe Called Quest exudes any enthusiasm at all on its debut album, that enthusiasm ...

A Tribe Called Quest: Why Are You Being So Treasonable Now?

Our reigning monarch scores as highly on the diss-o-meter as pop rapper Vanilla Ice for hip-hop hotheads A TRIBE CALLED QUEST. But a spot of ...

Besides achieving Top 20 success with their new single, 'Can I Kick It?, A Tribe Called Quest have also been heavily involved with the re-recording ...

DIRE STRAITS fans are huddled in masses in the near vicinity, oblivious to the fact that the real revolution is being televised in this makeshift ...

Review by Will Hermes, Spin, September 1996

LESS INTROVERTED THAN De La Soul and less weird than the Jungle Brothers, A Tribe Called Quest were always the populists of the Native Tongues ...

A Tribe Called Quest: How The Quest Was Gone

Say it ain't so! A TRIBE CALLED QUEST, one of the most loved and respected hip-hop bands ever, have bitten the dust. Here, they reveal ...

After The Love Is Gone: A Tribe Called Quest

DRESSED IN A black T-shirt with THE LOVE MOVEMENT emblazoned in silver on the back, baggy jeans, and a blue denim fisherman's cap pulled down ...

In its last LA shows, the influential hip-hop trio A Tribe Called Quest injects new life into its hit jams. It's a joyous party — ...

THE GREATEST AESTHETIC lesson to learn from past masters like David Bowie and Madonna is the value of reinvention. ...

THE TIP-OFF TO all of a Tribe Called Quest's considerable talent was the grainy, mischievous curl in rapper Q-Tip's voice: Tribe were abstract imps who ...

20 years after it was released and a month before the UK premiere of the Tribe Called Quest documentary Beats, Rhymes & Life, Angus Batey ...

With Wu-Tang Clan and Jurassic 5 touring, why are we hooked on nineties hip hop?

Hip hop heads often get misty-eyed about the 'golden age' of hip hop. But when was it? The formative years of Grandmaster Flash and Sugarhill ...

A Tribe Called Quest: We Got It from Here... Thank You 4 Your Service (Epic)

Review by Michael A. Gonzales, Wire, The, January 2017

With their secretly recorded sixth and final album, A Tribe Called Quest address the state of their nation with fury, humour and love. ...