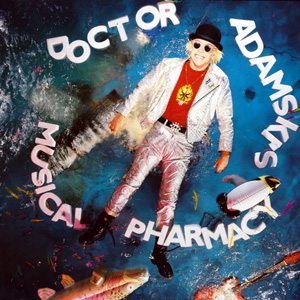 Report and Interview by Sheryl Garratt, The Face, April 1990

First there were the raves, and a few imaginative DJs who mixed live music with the records.Then there was Adamski, and the madness that is ...

TYPICAL SO-called "raves" (i.e. those massive dance parties held in cornfields off the M2S) don't usually start 'til gone midnight. Energy, which bills itself as ...

Adamski: This Is The Life!

The lucky swine! Adamski's record company has given him loads of money to go to LA, record some songs, rub shoulders with the stars, quaff ...

EVERYONE WANTS A PIECE of Adamski's skinny ass right now. So crammed is his schedule, I'm eventually made to feel very lucky indeed to be ...

CHAOS IS a word with special resonance for Adam Tinley, better known as Adamski. He even named his canine companion Dis after Discordia, the goddess ...

THIS IS Adamski's proper studio LP and it marks the end of his transformation from underground rave king to madly grinning pop star. Of course, ...

THE IMPISH PETER PAN of dance-pop, Adam Tinley is like that toddler in the Fisher Price ad feeling his way around the knobs and switches ...

HE'D HAD his day almost the moment he appeared, hadn't he? ...

Seal and Adamski: How we made 'Killer'

The singer and producer recall the acid house anthem that took them from illegal raves to stardom and a No 1 hit. ...