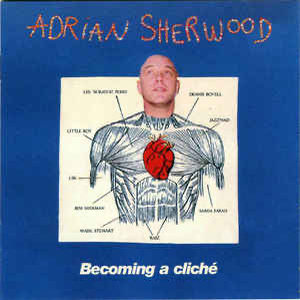 Producer/record company boss Sherwood talks about his huge array of projects: starting the On-U Sound label; projects and artists such as African Head Charge, Tackhead and Dub Syndicate; making dub records until his friend Prince Far-I's murder; working with Keith LeBlanc, Doug Wimbish and Skip McDonald; remixing Primal Scream's Vanishing Point, and the perils and pleasures of remixing; working with Lee "Scratch" Perry, and artists like Sinead O'Connor; the 'Barmy Army' football songs; his solo album Never Trust a Hippy; recording and technology, and running a label, and quite a lot about kids' football!

This week, the On-U Sound takes its show on the road with 36 acts and five hours of murderous rhythm every night. IAN GITTINS joined ...

Adrian Sherwood: It's My Turn

Profile and Interview by Sheryl Garratt, The Guardian, 24 February 2003

THERE'S NOTHING about the outside of Adrian Sherwood's home in north London to explain why the likes of Sinead O'Connor, Sly and Robbie, Primal Scream ...

Adrian Sherwood is feeling the riddim

NOT MUCH reggae music came out of the Home Counties during the early 1970s, but an awful lot went in. More than you might think. ...