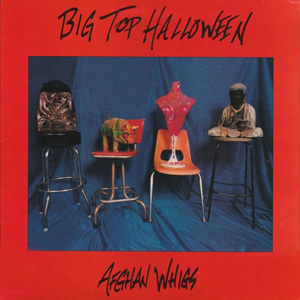 YOU THINK the world is f—ed? Take time out for a long, hard constitutional inside your own heart, friends, and chances are things won't look ...

I ARRIVED full of doubts, prompted by the Afghan Whigs' major-label debut, one of those song-cycle LPs. The story of a man and woman trapped ...

Report and Interview by Jason Cohen, Details, May 1994

The Afghan Whigs have made a career out of confrontation, failed love affairs, and loud guitars. Jason Cohen joins their traveling circus of maladjustment in ...

Afghan Whigs get Soulful on Their New LP, Black Love

JOE PIXIE IS PISSED. TWO FEET TALL, with a voice like a pubescent munchkin, he has been phoning around local fast-food joints trying to get ...

BEYOND BEDLAM strikes me as a good place to start. We are not dealing with half-assed melancholia here. Nor are we dealing with the chaos ...

Afghan Whigs: Will To Live

"I DIDN'T START UP A BAND BECAUSE I COULDN'T get laid," says Greg Dulli with that suave, Satanic leer of his. "I started a band ...

The Beast Inside: The Afghan Whigs’ Gentlemen

AMID THE SLEW of so-called ‘grunge’ acts that emerged in the early ‘90s, Cincinnati rockers The Afghan Whigs stood out for their soul influences and ...

Greg Dulli Has it Covered: The Twilight Singers

ONLY AFTER SPEAKING to Greg Dulli on the phone from his room at a Jury's Inn (somehow appropriate), I notice that on the CD of ...

The Afghan Whigs: Do To The Beast (Sub Pop)

WOMEN OF a certain age and tastes still come over all peculiar at the mention of Greg Dulli's name. Certain men, too. Of all the ...