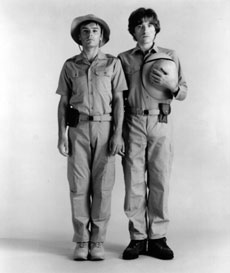 IF, AS SOME believe, 1998 is to be the year that France finally produces pop music of international appeal, then synth duo Air are the ...

Air: How ELO Can You Go?

MODULAR FRENCHMEN Nicolas Godin and Jean Benoit Dunckel need no reminding that French pop has always been a bit of a joke. With the brilliant ...

SOMEONE ONCE said of Dylan's Renaldo & Clara that, while it didn't convince you that he was a great film-maker, it did confirm that he ...

Air: 'If We Don't Surprise People Any More, Then We Will Die'

"THE FIRST time I was in LA," says Nicolas Godin, "I was in a very cool hotel. And in front of that hotel was a ...

DAFT PUNK AND AIR ARE THE BEATLES AND STONES OF THE INTERNATIONAL DANCE SCENE. SO WHY IS THE FRENCH ESTABLISHMENT – SO PROUD OF ITS ...

Air: One for the Ladies

SO HIP THEY'RE passé, sexy geekboys Air continue to mine the seam of elegiac futurism wowed ten thousand ad executives back in '98. After the ...

WHEN Air first appeared with their 1998 debut album, Moon Safari, the French duo seemed to define the musical zeitgeist. ...