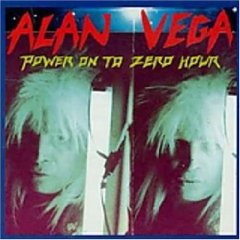 AS THE mercurial ‘Jukebox Babe’ starts to makes its steady impact as a 12-inch, here is an even grittier reinterpretation of The Great American Rock ...

ALAN VEGA'S recent departure into ersatz neo-rockabilly will elicit a variety of responses from his admirers. Some will call it a sell-out, but that's a ...

ONCE UPON A time, in the early '70s, long before currently voguish "new music" outfits like Soft Cell, Yaz and Human League, there was Suicide. ...

OVER THE years, many lesser talents have taken chapter and verse out of the Vega book, and who can blame them? Not me. ...

During the '70s ALAN VEGA switched New York on to a different wavelength. Ten years on, and he's seemingly blown a fuse with a 'commercial' ...

NOTE: Another unpublished piece for Bucketful of Brains from the prolific pen of Mr Jeremy Gluck, this time on Suicide's Alan Vega, written in 1988 ...

I PLAYED this when I was feeling flippant and swinging and it sounded boring. Then I played it while undergoing one of my Chiswick's-answer-to-Greta-Garbo phases ...

Ralph Traitor talks to the legendary Alan Vega, and finds one of rock's true originals with his finest solo album in years, and a man ...

BY THE SUMMER of 1978, punk rock had lost the power to shock. The revolution that had shot an amphetamine rush into a moribund music ...

Following the musical iconoclast's death at age 78 – an in-depth conversation from 2002 that includes tales of dangerous old New York, what it meant ...