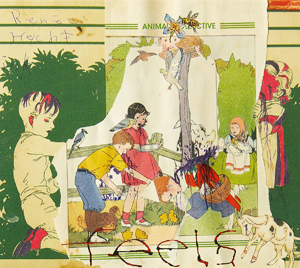 Profile and Interview by Simon Reynolds, The Wire, July 2005

Ben Thompson admires the furry friends who refuse to operate in a confined area ...

LIKE WATCHING SPEEDED-UP FOOTAGE of the dawn, you don't quite notice when one part of an Animal Collective set has ended and another has started. ...

Animal Collective is in a "Jam"

ACTUALLY, IF YOU haven't picked up on these guys by now, you haven't been surfing the online music blogosphere, which has been blathering about this ...

Animal Collective are retreating even further into their fool's paradise of a utopian never never land. Their daydream is tempting, given the alternatives. ...

IF THERE'S a common thread that links Animal Collective's songwriting it's their instinctive use of repetition – from the mantra-like becalming kind, to the sort ...