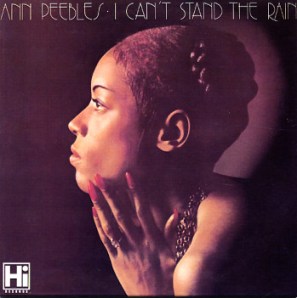 The Memphis belle, accompanied by fellow R&B singer David Hudson, talks about producer Willie Mitchell; her roots in gospel and R&B 'I Can't Stand the Rain'... and the John Lennon Kotex incident at the Troubadour!

ALREADY BEING tipped as a potential giant R&B record in this country is Ann Peebles version of 'Slipped, Tripped And Fell In Love'. The only ...

ON THE distaff side, soul music has produced a long run of superb girl singers and these soul sisters have found it far easier to ...

Ann Peebles: Hangin' On To Success

ALL OF a sudden, it seems like the whole world is talking about the talents of a magnificently soulful young woman and she puts it ...

APPLAUSE IN this sybaritic cafeteria is always a little suspect, being related to how far the performer can corroborate the Biba audience's good opinion of ...

CONCERTS at the ultra-trendy Biba's Rainbow Room almost invariably, for some reason or other, turn out to be disappointing and, from the reviews I've read ...

BRITAIN has been bitten by the Ann Peebles bug and, in a typical reciprocal move, our very own famous bug (commonly known as 'flu) has ...

ANN PEEBLES IS UNCONCERNED ABOUT HER LACK OF RECOGNITION HERE ...

Ann Peebles: Learning To Cope With The Rain

BEING THE recording artist for a classic can have almost as many pitfalls as advantages. The history of our music is littered with names who ...

THOUGH NASHVILLE, Tennessee, has proclaimed itself "Music City U.S.A.," the traditional center of musical activity in that area of the country, and the city from ...

ONCE A CONSISTENT R&B hit-maker, Ann Peebles's output has seen a precipitous drop in both the vitality of her music and the sales of her ...

IN 1968 IN Memphis, Tennessee, Willie Mitchell succeeded to the board of an ailing record company called Hi. ...

Willie Mitchell has virtually forsaken his own career in favour of running Hi Records and putting the label back up there... ...

After thirty years in the biz, Ann Peebles has proven she’s much more than just the "female Al Green." ...

When Ann Peebles and Gene "Bowlegs" Miller first crossed paths at the Rosewood Club in South Memphis, neither one would have called it destiny. ...

Review by Mike Atherton, Echoes, May 2006

THE RETURN OF two legendary names from the past: Track Records, the label which gave us Jimi Hendrix and the Who, not to mention fine ...

Ann Peebles: The Girl with the Big Voice

Retrospective and Interview by Dorian Lynskey, Guardian, The, 20 February 2014

THERE'S A COMMON cliché in music biopics that you might call the eureka fallacy. Our hero is having a conversation or strumming a guitar when ...