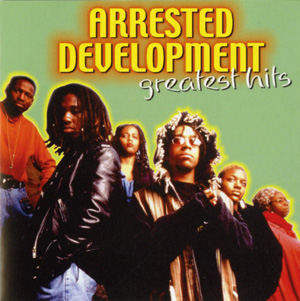 Arrested Development: 3 Years, 5 Months and 2 Days in the Life Of... (Cooltempo/Chrysalis)

Arrested Development: 3 Years, 5 Months And 2 Days In The Life Of... (Cooltempo)

THERE ARE THOSE amongst the hardcore rap community who think Arrested Development's down home, rural southern porch-sitting image is a stereotyped one that will prove ...

THE NAME suggests a grungy Midwest punk band, but Arrested Development is actually a black rap family based in Atlanta. Like the "Native Tongue" groups ...

ATLANTA hip hoppers Arrested Development are the very antithesis of Ice Cube, whose tour they follow by just a few days. They counter Cube's scatter-gun ...

PASSING THROUGH San Francisco (the fourth stop on the tour) last Tuesday, Lollapalooza '93 showed signs of going to seed: the electronic billboard above the ...

SECOND ALBUMS are traditionally harder to make than first ones. Was that true for Arrested Development with Zingalamaduni? ...

AT ARRESTED Development concerts, its not enough to wave your hands around; "put your souls up" is the cry. Three songs in, Speech stopped everything ...

IT TAKES A while, but I finally work out what it is they remind me of. ...