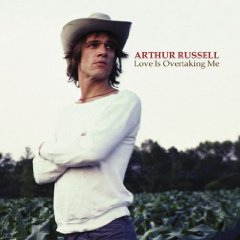 WHEN JONATHAN Richman went acoustic, the other members of The Modern Lovers tried really hard to play with him but it just didn't work out. ...

Last week Frank Owen unearthed the warped machismo of JUST ICE. Now, in the second part of his investigation into SLEEPING BAG RECORDS, he corners ...

YOU MAY KNOW ARTHUR RUSSELL FOR HIS WORLD OF ECHO ALBUM. THEN AGAIN, YOU MAY REMEMBER DINOSAUR L OR THE NECESSARIES OR... WELL. FRANK OWEN TAKES US ON A TRIP ...

RUSSELL, A fiery chameleon of a man, a nervous splutter of contradictions and paranoia, seems available to all interpretations and answerable to none. World Of ...

This New York composer, who died in obscurity of AIDS in 1992, was a true visionary, traversing dub, disco and minimalism and anticipating the '90s ...

Arthur Russell is the great enigma of New York's music scene. A cellist, Buddhist and former music director at the legendary Kitchen, he was seduced ...

IT'S AN UNLIKELY STORY: avant-garde cellist sees the light in a disco glitterball at New York gay club The Gallery and decides disco is the ...

Retrospective and Interview by Kris Needs, MOJO, May 2010

"I'VE GOT so much to do. All the music in the world," wrote Arthur Russell to a San Francisco friend after arriving in New York ...