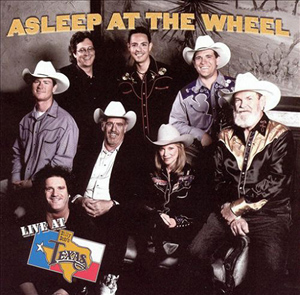 IF, IN A FLIGHT of fancy, you've ever ventured over to this particular neck of the woods you won't be at all surprised to learn ...

CAN AN ELEVEN-PIECE WESTERN SWING BAND EVER FIND WEALTH AND PROSPERITY IN THE WORLD OF ROCK'N'ROLL? ...

I DON'T think I've ever seen so many ten gallon hats on one stage. Not outside Texas, anyhow. And so many straight-legged jeans and cowboy ...

Asleep at the Wheel: The Wheel

THIS ISN'T going to be a very long review, because I want to play the record again before the pubs open. ...

Asleep At The Wheel: The Wheel

THIS IS Asleep At the Wheel's fifth album in seven odd years. It's the one, so they hope, to transform them from a cult country ...

Asleep At the Wheel: The Wheel (Capitol)

I'D BEEN beginning to think there wasn't that much happening on the live front until I saw Asleep At The Wheel at Hammersmith last week. ...

The Texas Playboys, Asleep at the Wheel: Panther Hall, Fort Worth, Texas

STRANGE TO relate but not everything that emerges in the new release racks this week will bear the mark of androids in overalls. And disco ...

SAM PHILLIPS, the man behind Sun Records was easily one of the most important figures in the history of American popular music. ...