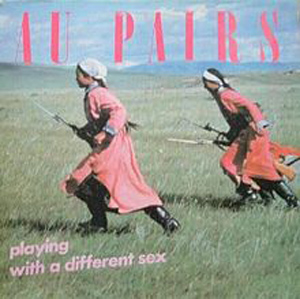 The Au Pairs: Battle of the Sexes

I REMEMBER I got a letter some time ago from Ali of Another Tuneless Racket fanzine from Scotland, in which the author questioned the reasoning ...

Au Pairs: Every Home Should Have Four

"THE TROUBLE with conversations like this," declares Pete, nodding sagely, knitting his eyebrows, as he refers to the complex peculiarities of a pop group who ...

Equal Shares For The Au Pairs

Interview by Iman Lababedi, Creem, May 1982

"He works the car, she the sink She's not here to think Sits with the paper, discuss the news She doesn't have political views" 'Diet' ...

HOW COULD they have known? The caption under the BBC1 column in the Sunday Times television listings for May 30 was unmistakeable. "6.10. Sense And ...

Au Pairs: Stepping Out of Line

THE MIDDLE OF the first decade of the 21st century has seen a reappraisal of the music which followed punk. Not an academic, clinical exercise, ...