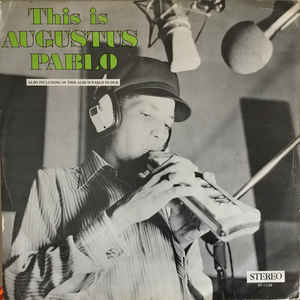 RIGHT NOW, Dub is at the cutting edge of reggae. ...

IN THE Chinese puzzle box of sound that comprises reggae's radiological dubstream, there are two types of artist: Augustus Pablo and The Rest. ...

Augustus Pablo: Man from the Hills

For over a decade, and through the endless changes in the music's style, the melodica musings of AUGUSTUS PABLO have drifted across reggae, haughty and ...

JAMAICA'S A QUIRKY PLACE, to say the least, so it's oddly appropriate that its foremost instrumental soloist would turn out to be a low-key virtuoso ...

REGGAE LOST one of its most distinctive sounds with the death of producer and instrumentalist Augustus Pablo in Kingston, Jamaica, on May 18th. The cause ...

A Bluffer's Guide To Dub

Note: This piece originally featured in Jockey Slut magazine and was written to serve as an introduction to those who had heard the word Dub ...