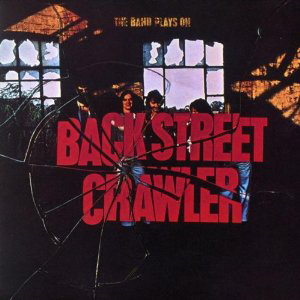 WHEN Free finally fell apart at the seams after staggering around in various forms, there was a lot of damage done to the members. Despite ...

Back from the Dead: Paul Kossoff

Despite that painful appearance on the OGWT, Paul Kossoff is Alive and as Well as anyone could be after being at death' s door ...

IT WAS a fairly complete emotional experience watching Back Street Crawler at the City Hall. You wondered where performance ended and real life began. Was ...

IF YOU want a nice, peaceful night's rock 'n' roll don't go anywhere near a Back Street Crawler gig. It's more like an on the ...

IF YOUR tastes run to nasty, sweat-and-gore boxing as well as nasty-hot rock, the ringside seat for you in the next couple of months should ...

THIS IS the last recording Paul Kossoff ever made which means that commenting on it is rather like reviewing a gravestone. You just don't. But ...

A CAPTAIN Midnight character adorns the cover, but he's no way as snobby as a similarly named person who writes in the Sunday Times. ...

Back Street Crawler: Leaving Coffins Outside Dressingrooms is Sick

Just one of the problems Back Street Crawler have had to contend with since the death of Paul Kossoff. Terry Slesser explains. ...