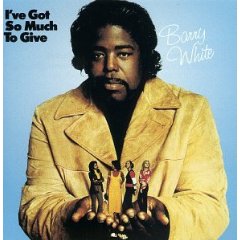 Some things turn me on...like the way you might say a word or the way you wear your hair and have a certain smile on ...

The Walrus of Love talks about releasing himself and other acts on own label, and the advantage of being independent; the state of R&B today; praises Jackie DeShannon and Brenda Holloway, and talks about new album Sho You Right.

SOUL ENTHUSIASTS used to call it "deep-soul", the kind of sound which usually didn't even get released over here, and when it did, sold in ...

ANYONE WHO has heard Barry White's first album on 20th Century will undoubtedly concur on the point I am about to make – he is ...

Triumph at the Rainbow ...

YOU KNOW, I've heard people say that too much of anything isn't good for you. But I don't know about that, 'cause the fact is, ...

THE TITLE TRACK has just left the British and American top thirty. The album itself is resting at No. 1 on the US album charts ...

"ISAAC HAYES? I defend him now," Barry White smiles confidently in his dressing room, Chivas in hand, dragging on his Benson-Hedges menthol. "People started to ...

Disco: "Kids Want Something Different — This Is It!"

...so says Billy Smith, an expert on New York's booming discos. In a country where radio rules, it's an amazing phenomenon. CHRIS CHARLESWORTH reports... ...

RESIGNED AS we are to the gradual dilution and destruction of American soul music, there remains something unearthly in the success enjoyed by Barry White. ...

Profile and Interview by David Hancock, Record Mirror, 17 May 1975

IF YOU ever meet Barry White, don't mention Gene Page. Things could get a little rough. Barry, weighing in at somewhere near 20 stone, is ...

THERE'S BEEN some controversy about the prices on Barry White's English gigs – £5 was the top price at Birmingham. ...

Everything you ever wanted to know about the giant of sexy soul ...

The Discreet Charm Of the Black Bourgeoisie: Barry White and Company

WHEN YOUNG American blacks threw off their jeans, gave them to the white kids, and emerged supercool in their three-piece suits, brogues and cashmere sweaters ...

Report and Interview by Philip Norman, Sunday Times, The, 1977

BARRY WHITE is the singer who turned black Soul music into a product closer akin to soggy white blancmange. ...

Barry White: On The White Line To Barry

Barry cools down a heavy breathing Rosalind Russell, a bit more than arms length away ...

Barry White struck gold with his last single and album but he's set to surpass himself with his plans for next year ...

IT'S an old criticism that so few people practice what they preach. But, in the case of Barry White, the title of his new album ...

FROM THE bowels of the earth rises a huge profound rumble. It sends tremors through your ankles, fondles the underside of the floorboards, and finally ...

Barry White: King Shag Is Back

Bombing around The Riveria in a convertible BMW screaming abuse at the rich are STEVEN WELLS and lensman KEVIN 'O'GRADELY' CUMMINS. The soundtrack that roars ...

Lurve and kisses: Caroline Sullivan on the night Barry White made the earth move ...

BARRY WHITE has based an entire career on his notion of himself as a 100-horsepower love machine. ...

HOW THE devil are you?I'm fine. I couldn't be happier. Everything is beautiful in my life. I got a hit album and hit single. I'm ...

Seventies legend Barry White has them swooning in the Wembley Arena aisles with his unique brand of bedroom soul ...

FEW ARTISTS CAPTURED the aspirational glamour of the 70s better than Barry White. ...

THOSE OF US who thought Barry White was God will now look on the bright side and consider it official. So often rendered a figure ...

Retrospective and Interview by Michael A. Gonzales, Wax Poetics, July 2010

Barry White's unlimited passion took him to the heights of music ...