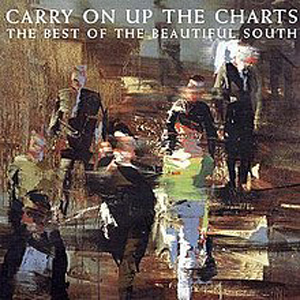 IN THE 12 MONTHS since they bid us Welcome To The Beautiful South, the perplexing popsters have been pretty low-profile, taking a measured approach to ...

AS THE Beautiful South's single ‘A Little Time’ slips down the UK charts from Number 1, in Germany it's starting to pick up sales. And ...

Interview by Stephen Dalton, Vox, May 1991

PAUL HEATON GLOWERS like Mister Punch's suicidally depressed uncle with a killer migraine and inflamed piles. He is not a happy man. ...

"The perfect love song it has no words, it only has death threats/And you can tell a classic ballad by how threatening it gets." ...

PAUL HEATON hasn't had a whiff of the much bandied about teen spirit since disbanding The Housemartins. When he ditched every thinking bank clerk's favourite ...

IN THE FINAL of the Barclays' Football League programme for the 1991-92 season, The Beautiful South have deviated from the script that identifies them as ...

Their new album may have screamed in at number one but The Beautiful South are lousy live, says Caroline Sullivan ...

…fibs Paul Heaton, leader of The Beautiful South, who're following up the third most successful album of all time with what they would like to ...

PLAINLY NOT RUGGED T-SHIRT-IN-A-SNOW-storm northerners, The Beautiful South's vocal frontline take to the stage for their second night at the RAH in a winter collection ...

BLASTING INTO Munich airport for 24 hours on the road with the Beautiful South, the band’s publicist offers some sage advice: "Just don’t try to ...

New and improved greatest hits. Every pub should have one. ...

A Drink With… Paul Heaton

BEAUTIFUL SOUTH singer Paul Heaton, is an unlikely popstar. He never wanted fame, riches or to sing, and formed his first band, the Housemartins with ...