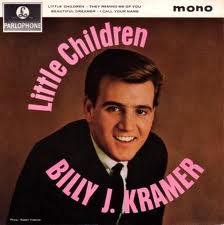 FIRST THE BEATLES, then Gerry and the Pacemakers. Now a new Liverpool name, Billy J. Kramer, looks set to take the NME Chart by storm ...

Billy J. Kramer: Singing Was Forced On To Me!

BILLY J. KRAMER sat back in his manager's London office and looked thoughtful as the bubbles settled on top of his cup of hot tea. ...

Great Session by Billy J — But Those Tonsils Will Have To Come Out!

BILLY J. KRAMER has tonsil trouble. "I reckon I'll have 'em chopped out in September," he told me over the phone last week. "The specialist ...

BILLY J. KRAMER stood in the wings at Southend Odeon at the weekend, clicking his fingers to the rhythm of the Dakotas. A spotlight penetrated ...

BILLY J. KRAMER lashed back his second entire French loaf, whooshed amiably through a large crab salad — and talked about the trials, tribulations and ...

Billy J. Kramer: Billy Has An Eye For Pop Fashion

BILLY J. KRAMER, rated one of Britain's snappiest popsters dresswise, was talking to me about his wardrobe. We were in Liverpool, where Billy was relaxing ...

Cilla Black writes for Disc... They Spoil Me

A BLONDE hairdresser is said to be very much the apple of Ringo Starr's eye at the moment. She lives and works in Liverpool and ...

Cilla Black's a mighty popular popster and Fab fans of hers wrote in droves asking about Cilla's birthday. Since her 21st was coming up we just had to ...

I LEANED BACK in my chair and regarded my empty lunch plate with a satisfied smile. ...

Liverpool: News from the North

RAVE girl Dawn James pays a return visit to Liverpool, home of the Beatles, birthplace of the big British Pop Scene, and discovers some interesting ...

Retrospective and Interview by Richie Unterberger, Record Collector, May 2010

Richie Unterberger celebrates a legendary who's who of rock and soul royalty caught live in their prime, and now finally available on DVD. ...