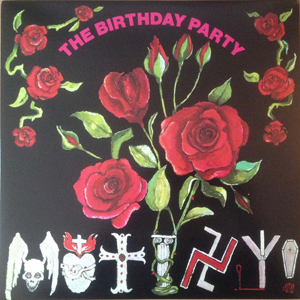 WITH CHANNEL 4's cameras peering over their shoulders, both sets of Wild Men of Pop felt a little inhibited. Mindful of television's cold, reducing stare, ...

LATE AGAIN, so I missed most of the Birthday Party — who I was looking forward to the most, as it happens. Theirs is the ...

The Birthday Party: Abbo — The Album

WHEN THE Birthday Party were recording their Prayers On Fire LP back "home" in Melbourne, Split Enz were recording Waiata in the studio next door. ...

After The Pope's Blood: Gatecrashing The Birthday Party

THE BIRTHDAY PARTY? Well, yeah, like in blowing out candles on a cake. This party is a crashed party and anyone with a part of ...

"IF, LOVING a woman more than anything in the world, or anticipating the possibility of such a love, one were suddenly to see her chained ...

The Birthday Party: The Sound and The Fury

Reared under the hothouse conditions of Melbourne, London and Berlin, The Birthday Party's bad seed has finally blossomed into a magnificent demon flower. On one ...

A celebration of lunacy and loud noise imported from Australia. Peter Silverton finds it quite inviting. ...

Goth: Back to the Batcave

"WE HATED BEING called goth," muses the impeccably suave Flesh For Lulu frontman Nick Marsh. "If they called you a goth then you couldn't be ...

The Man Who Inspired Nick Cave: Mick Harvey on the Greatness of the Late Rowland S. Howard

THE CULTURAL landscape is littered with the faded memories of those who came and went without the honours corresponding to the levels of their actual ...

see also Boys Next Door, The