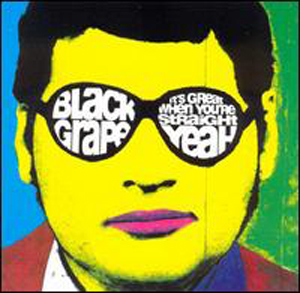 Black Grape: Pips Out For The Lads

If you expected old fruit SHAUN RYDER to come back as reconstructed new man you were pissing in the wind. PAUL MOODY discovers that the ...

Black Grape: Forget It All For An Instant

After all the pills, thrills and bellyaches, Shaun Ryder felt peckish — so he nipped off to Kentucky Fried Chicken. It took him three years ...

Profile and Interview by Caitlin Moran, The Times, 21 July 1995

Shaun Ryder's new band have made a brilliant album, but it won't impress the Pope. Caitlin Moran explains ...

BLACK GRAPE are currently the hottest new property in British rock. Even prior to their first single, acres of music press coverage had signalled the ...

Call the cops! Manchester's premier exponent of hooligan rock is back, and sounding better than ever. Cliff Jones grills the Black Grape head honcho on Star ...

Black Grape: It's Great When You're Straight... Yeah! (Radioactive)

YOU KNOW the story. Just over two years ago, it all went pear-shaped for Shaun Ryder. Smack addiction, bitter infighting and musical stagnation finished off ...

In the first of a series never, ever to be continued, Shaun Ryder presents his passport to the land of a thousand karma sutra babes. ...

Once the high priest of proletarian hedonism, Shaun Ryder has traded in the low-life for a leafy London suburb. It's been a good move. The ...

After breaking and entering the album charts at Number One, BLACK GRAPE decided to drag their scuzzy, 24-hour party on the road. VOX gets over-friendly ...

BLOODY HELL. Seven years since The Stone Roses played a legendary show in this very building, and seven days after they split, it's like Madchester ...

WHEN SHAUN Ryder recently sang Black Grape's comeback hit 'Get Higher', he no doubt afforded himself a mischievous grin. For years, Ryder was the dark ...

BLACK GRAPE hit No 1 with their debut album in 1995, yet never truly felt part of the Britpop circus. For obvious reasons, you were ...