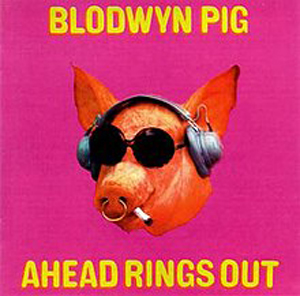 Blodwyn Pig: Ahead Rings Out (Island)

Blodwyn Pig: Ahead Speaks Out

I'D NEVER seen Mick Abrahams in a suit before. In fact, he'd confessed to me that he'd never bought a suit in his life. He'd ...

Full Ahead for Pig! Blodwyn Pig

MY FIRST encounter with Blodwyn Pig was hearing their single, 'Dear Jill', when a friend came round to tell me about the wonder group. I ...

IT IS BY now fairly common knowledge that Jethro Tull was this eighteenth century sort of crank from England who went around advocating the use ...

Blodwyn Pig on a Cold and Rainy Night ...

Blodwyn: It's Blodwyn, Not Piggy Banks!

WHAT HAPPENED when the Pig got up and slowly walked away? A new group emerged simply called Blodwyn, with the added new power of guitarist ...

Why Mick Decided He Had To Jilt Blodwyn

THE VARIOUS antics of Mick Abrahams ceased to amaze me months ago. The lad is a natural comedian with a wide range of goonish voices ...

Is There Life After Rock Guitar Godhead?

ALVIN LEE HAD reached the pinnacle of rock guitardom. Of course, by the time Woodstock was over, his "I'm Going Home... by helicopter" histrionics would ...