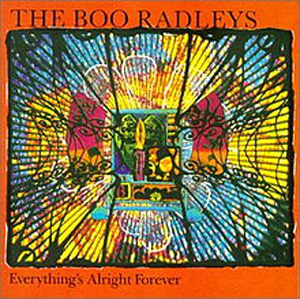 OF COURSE, they said it would be this good. And while The Boo Radley's stout-hearted self-opinion was a cheering presence in 1991's (complacen)sea of mumbles ...

TIME FOR a rethink. At some point (just between the dreamy acoustic sway of ‘Wish I Was Skinny’ and ‘Leaves And Sand’ I think, but ...

Boo Radleys: Fab — and that's not just the Boos talking

So how did a, let's face it, pretty morose bloke such as Martin Carr manage to come up with Wake Up!, which is, let's face ...

AS MUSIC biz jokes go, The Boo Radleys are a very, very good one. Formed in Liverpool in 1989, their topsy-turvy career (taking in baldness, ...

IT IS 4.42 AM. Martin Carr and Bob Cieka of the Boo Radleys are, um, "relaxing" at the Hotel Sol in Barcelona after a suitably ...

How an obnoxious teenager, revelling in the obscurity of her pop passions, met Bros in the supermarket aisle to Damascus ...

Boo Radleys: Find The Way Out

THE ONLY CREATION act other than Oasis to have a Number One album, the Boos were arguably the label's most eclectic signing. This 35-track anthology ...