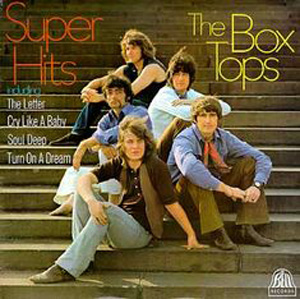 THE BEST way to establish an act in the musical big time is to have a No. I record. ...

THE BOX TOPS? Are you serious? Those yokel hacks grinding out rattly pop for the tyrannical Top 40? Those squeaky-clean goons in paisley scarves and ...

The Box Tops: Perfectly Packaged Pop That Sold A Million

Retrospective by Tom Hibbert, The History of Rock, 1983

While most of their contemporaries were dabbling in flower power and psychedelia, the Box Tops found success with a pop-oriented soul sound that was distinctly ...

ADDING YET another layer of cracked lustre to lead singer Alex Chilton's legendary cult-star, The Box Tops popped on-stage, pumping out a pluperfect-for-frat-parties version of ...

IN THESE trivia-obsessed times, it's probably worth knowing that the first Number One hit recorded in Memphis by a Memphis act was 'The Letter'. It ...

The Glory and Grandeur That Is Defeat: The Music of Alex Chilton

I. Entrance: On the Slopes of Parnassus ...

The Glory and Grandeur That Is Defeat: The Music of Alex Chilton, Part 2

IF THE FIRST ALBUM is soulful and unconscious, the second develops a narrator and player who find new voices, taking on consciousness, memory, and loss. ...