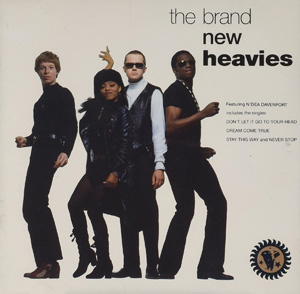 THE BRAND NEW HEAVIES, after an early association with fellow rare groove outfit Diana Brown And The Brothers, came together in the late 70s. They ...

Brand New Heavies: May The Funk Be With You

The Brand New Heavies have moved into the forefront of a new musical uprising: clubs, bands and vintage denim. The revolution is here – and ...

"IT'S JUST tinkly pianos and wailing slags," was how 808 State once summed up the contribution of female vocalists to house music. If it wasn't ...

MY MOTHER warned me about getting into cars with strangers. Perhaps she should have also told me about the dangers of accepting voyages into strange ...

THE STAGE is awash with reflected light from a dozen mirrorballs and the back wall is bedecked in enough gold lame to keep Moz in ...

WHEN BRAND New Heavies lumbered on to the scene in 1988, few would have rated their chances of surviving into 1994, let alone of becoming ...

Audiences across the Atlantic have taken to THE BRAND NEW HEAVIES like their long lost brother/sister, seduced by the glamour of these sharp-dressed poppy funksters. ...