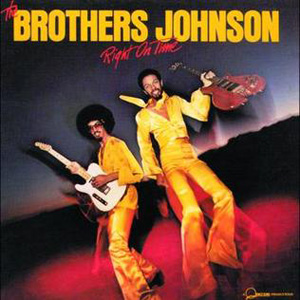 The Brothers Johnson: Look Out For Number One (A&M)

Brothers Johnson: Good To Ya, Good For Ya

ONE OF the success stories of 1976 in terms of 'newcomers' on the scene is concerned must involve George & Louis Johnson. Although they'd worked ...

With their 'Strawberry Letter 23' smash, George and Louis have consolidated their sensational breakthrough of last year. David Nathan caught up with them in New ...

"WE ALWAYS have enough material lying around to complete another seven albums," asserted George Johnson, the senior member of the funky, guitar-toting twosome. ...

AS BONES OF contention go, there is currently none more fat and juicy than the one being wrestled between the main pack of legit music ...

'PLATINUM' IS THE perfect word to precede 'record' when you’re a musician today. And with a three-for-three tally, the Brothers Johnson are decorating their walls ...

"JAZZ IS the teacher", runs an aphorism recently coined by the avant-garde guitarist James Ulmer, "and funk is the preacher". What he meant was that ...

SO WHAT did happen to the Brothers Johnson? Just a couple of years ago, they took 'Stomp' to the highest reaches of the charts and ...

FEMINISTS, GET ready to fill the fountain pen with a good supply of vitriol. George Johnson, one half of the back-in-business Brothers Johnson, says: "Wives ...

Powerful bassist on Michael Jackson's albums Thriller and Off the Wall, he found fame in the 1970s with his funk band the Brothers Johnson. ...