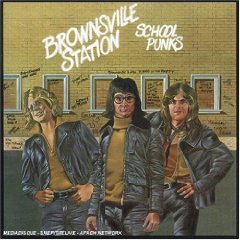 AS WE SEE it now, about 12 years ago a lot of people had good foresight. They knew what was going to happen in the ...

DETROIT, FOUNDED in 1736 by a turncoat (to both sides) halfbreed Indian named Quazimodo from the Kuitee tribe which dwelled circa 1670-1777 on the shores ...

I DON'T KNOW if there's any correlation between Brownsville Station's oddly misplaced power chords on parts of their new album and the band's misreading of ...

THERE'S NEVER been a band that wanted to be teenage as desperately as Brownsville Station. They've tried everything, from '50s rock ('Rockin' Robin', 'Hello Mary ...

THIS IS AN IMPORTANT album. It's a good album, too, but even if it were terrible, it would still be important. ...

INSTANT CUT-OUT!! It's a shame, too, cuz Brownsville Station produced many sweathog elpees over the years. Cept now you find 'em all in bargain bins. ...