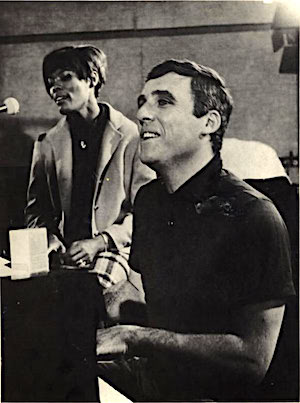 In London to receive an Ivor Novello Award, the great lyricist recalls his days in Manhattan song factory the Brill Building with writing partner Burt Bacharach; hanging out with Jerry Leiber and Mike Stoller; writing for Frank Sinatra; Dionne Warwick's transformation from demo singer to star; 'Make It Easy On Yourself' and 'Anyone Who Had a Heart'; his favourite songwriters; riding the rock wave; and the revival of interest in his work.

Burt Bacharach: The man who put neurosis into top pops

Profile and Interview by Maureen Cleave, The Evening Standard, 29 August 1964

THE INTRODUCTION of the Neurotic Ballad to British popular music is the responsibility of an American called Burt Bacharach. We first developed a taste for ...

Burt Bacharach: "Time Is My Enemy"

"I JUST DON'T get enough time to cram everything in," top U.S. songwriter, arranger and producer Burt Bacharach told me, during a two-day visit last ...

'Money Means Nothing To Me' says Bacharach

ISN'T IT weird how people who make a living out of a particular talent often have personalities quite different from that you might expect? A ...

Report and Interview by Richard Green, Record Mirror, 8 May 1965

Dionne Warwick — The Ability to Communicate an Emotion

DIONNE WARWICK'S beautiful performance in concert at London's Royal Albert Hall last week was a demonstration of how a rare talent overcomes any sort of ...

REMEMBER HOW far-out 'Anyone Who Had A Heart' sounded in '63? All those cliff-hanging stops and starts, and that incredible arrangement... almost as weird as ...

An Evening With Bacharach Pop Format-Artistry Gets to Be Repetitious ...

Back to the Brilliance of Bacharach

Anyone who has a heart, including a new generation of British youngsters, is still falling for the magical Sixties music of Burt Bacharach, says Barney ...

Bacharach to the Future

"Do you know the Way to Monterey? Santa Fe? Whitley Bay?"

Imprisoned in music's metaphorical lift for years, Burt Bacharach has emerged on to a mezzanine packed with thousands of dewy-eyed disciples. "It's sensational news," he ...

What's It All About, Bacharach?

Anyone Who Had A Heart: The Songs of Burt Bacharach and Hal David

Burt Bacharach: The Look Of Love

Burt Bacharach had his first hit when Elvis Costello was in short trousers. Costello had hits of his own when Bacharach's star was waning. Now, ...

Two years in the making, the full-on follow-up to ‘God Give Me Strength’, their collaboration from the soundtrack to Grace Of My Heart. ...

ONLY FIVE years ago in the UK, it needed to be reaffirmed that Burt Bacharach is one of the greatest popular musicians of the second ...

We're In Love With This Guy: Hal David

Lyrical legend HAL DAVID has just become the first non-Briton to be honoured with a prestigious Ivor Novello Award by the British Academy Of Composers ...

RBP: What exactly did Sony BMG's Rob Stringer say that prompted you to try something so different with At This Time? ...

At This Time: Burt Bacharach

AFTER 40-PLUS YEARS, one of America's greatest songwriters finally has something to say. Which is not to suggest that songs like 'Close to You' or ...

You could be a good singer from now 'til hell and back and if you haven't got material, you're just standing there with your mouth ...

HAL DAVID'S NAME should be a lyric. This prolific American lyricist who turned 90 on May 25, 2011, is chairman emeritus of the Songwriters Hall ...

"He writes in hat sizes. Seven and three-fourths." Frank Sinatra on Burt Bacharach

IF THE DETAILS of Burt Bacharach's romantic escapades — and there were many, since as Sammy Cahn once said, Burt was the only songwriter who ...

Burt Bacharach: What Was it All About?

AT THE AGE OF 85, the man who has been described as the greatest songwriter of the 20th century cuts a surprisingly energetic and restive ...

Burt Bacharach: Royal Festival Hall, London SE1; Anyone Who Had a Heart (Alcourt)

The effect of seeing Bacharach live at the Royal Festival hall was to be hit by more top-40 songs that you'd think a single act ...

Inside the head of... Burt Bacharach

The composer says he's a perfectionist to the point of obsession (as Dionne Warwick or Cilla Black will tell you). It caused his biggest regret: ...

Burt Bacharach, GoGo Penguin and Esperanza Spalding are other highlights ...

"THE QUESTION I always get asked is, 'Why are you still doing this?'" The answer for Burt Bacharach, 91, is love, sweet love. "It makes ...