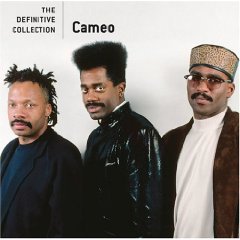 The Cameo frontman goes back and forth over his influences, the band's formation and changes over the years, philosophy, race and all kinds of fascinating stuff!

Cameo: Still Going Strong After Rigor Mortis Has Set in

CAMEO, ACCORDING to my tattered old Webster's, in the literary sense is — quote — "a piece of detailed writing in polished style." In the ...

Tied Up In Notts

CAMEO? Not funk? ("When you think of funk you think of guys who don't take baths...") SIMON WITTER learns the art of staying a cult ...

Larry Blackmon, the man with a lead role in Cameo, doesn't like his music labelled funky. He also has these Rambo fantasies. Paul Sexton decides ...

DESPITE CAMEO'S low media profile, they boast a distinguished history of 11 album releases yielding estimated sales of 20 million records. It is but one ...

LET'S RESIST the churlish temptation to start wondering how many of Cameo's crowd were there when they last funked the hell out of Hammersmith 18 ...

THE MANDATORY credit to God is featured in the small print on the sleeve of Cameo's eleventh album and, when you consider how many cruddy ...

Listen up! Ambition may be the result of having a possessive, overbearing mother, but just eat a big avocado salad and you'll be solid. And ...

WORDS UPSIDEDOWN: Because you're not the only one whose heart has been broken and Blackmon's approach will serve to remind you of this – and ...

Oh. That's funny, we could have sworn you were the bloke with the"codpiece" from Cameo, Larry Blackmon (for it is he) announces his plans for world domination. ...

His codpiece was banned from TOTP, his new single 'Candy' has been banned by Radio One, but LARRY BLACKMON has still led Cameo to the ...

TRAPPED BY THEIR UNDERPANTS ...

Cameo: Flat Out for the Top

THERE WAS a time when Larry Blackmon's yowl was a definite signal to be on the lookout for the funk. Cameo's leader and main vocalist ...

WELCOME TO the parallel cosmiverse of Larry Blackmon, where time stands still, and real guys wear codpieces and sport gravity-defying barnets, safe in the knowledge ...