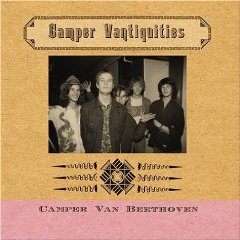 "WE TAKE way too many hallucinogens, we're totally paranoid, and we believe in giant conspiracies. If we get a flat tire, it's caused by the ...

WHAT'S A Camper Van Beethoven? Actually, I forgot to ask. But check what I heard when I asked about its role models. ...

CAMPER VAN Beethoven occupy the leftovers of Americana. Others have claimed the broader fields of country music and rock and punk, and the great subjects ...

CAMPER VAN Beethoven, the long-time champ of college radio, has burst out of the indie underground with a strong major-label debut that boasts better songs ...

SWOOPING IN from a nostalgic and sun-nourished California that never even existed, Camper Van Beethoven touch down in London with mature and majestic grace. In ...

FOR THEIR FIRST album since 1989's elegiac Key Lime Pie, David Lowery and his original posse of SoCal stoners reunite for a fascinating life-during-wartime alt-rock ...

I'VE NEVER REALLY agreed with the famous quip (attributed to Martin Mull) that "writing about music is like dancing about architecture". Nick Tosches, Lester Bangs, ...

DAVID LOWERY is the lead singer and chief lyricist for two well-known rock bands: Camper Van Beethoven, which he co-founded in 1983, and Cracker, which ...