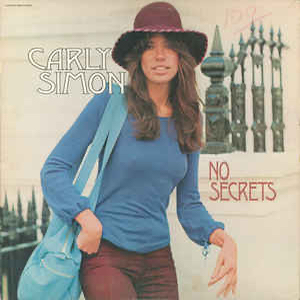 The singer-songwriter discusses the soundtracks to the movie Heartburn (and current project Working Girl); plus Reagan, Dukakis and Jessie Jackson, and American politics in general; growing up in the illustrious Simon (& Schuster) family; the pros and cons of Live Aid; drugs and her generation; working with Clive Davis at Arista... and her reluctance to play live.

IT SEEMS ENTIRELY possible that Carly Simon (with one highly successful album high in the American charts, following a top ten single) might well be ...

CARLY SIMON has been compared to a lot of people. She admits: "I'm told I sound like Judy Collins and my style of writing is ...

Elektra: The House That Jac Built

The story of Elektra, one of rock's most influential labels. As told to Loraine Alterman by founder JAC HOLZMAN ...

CARLY SIMON possesses a great cross between charisma and class. She looks just like Mick Jagger; but never photographs the same way twice. She changes ...

Jac Holzman Then and Now

Interview by John Tobler, ZigZag, May 1973

IF EVER I've identified with a record company, the nearest thing in my mind to an ideal would be Elektra Records, for many reasons, not ...

Carly Simon, Dory Previn and Mary Travers are three major artists whose work and lives exemplify the independent role women are assuming in society. As ...

Carly and James: The Taylors in Paris

WITH CARLY MAKING OLE LONESOME JAMES SMILE (WELL ALMOST) — IN AN ATMOSPHERE OF TRUE LOVE GUARANTEED TO THREATEN THE DEFENCES OF THE MOST HARDENED ...

SINCE SHE recorded her No Secrets Carly Simon has been through a huge change in status, becoming widely recognised and appreciated through 'You're So Vain' as well ...

NOW THAT she and her husband James Taylor are parents, Carly Simon has no plans to perform except on vinyl. And with her fourth album ...

IT USED TO be said in the late '60s that if you wanted to give your kid sister an LP the choice would be the ...

Profile and Interview by Michael Gross, Circus, May 1974

Carly's new LP offers an intimate peek into the home of one of America's most sought-after and most reclusive couples. ...

NOW THIS lead's going to sound confusing, but please bear with me. There are people you like just for their music and there are musicians ...

A FEW months ago, with surprisingly little fanfare, Carly Simon, husband James Taylor and daughter Sarah slipped into Los Angeles for what has become an ...

THE HOUSE WAS set back behind a stone wall, at the end of a cul-de-sac off Coldwater Canyon between Beverly Hills and the San Fernando ...

THOUGH BOTH James Taylor and Carly Simon have been frequently castigated for being sensitive rich kids, I'm surprised we've never congratulated James for transcending his ...

CARLY SIMON used to be dangerous. Remember? She had to her credit a lethal attack on marriage ('That's the Way I've Always Heard It Should ...

No longer one of the girls ...

Profile and Interview by Adam Sweeting, The Guardian, 30 July 1988

Carly Simon is back after years of artistic famine. She tells Adam Sweeting about life beyond the emotional bumps ...

THIS IS THE fifth Carly compilation in less than ten years (and, yes, one was imaginatively entitled Nobody Does It Better), during which time she ...

Carly Simon: A Not So Vain Superstar

TALKING TO Carly Simon is like getting an invitation to the most impossibly sophisticated party you'll ever go to but instead of making you feel ...

Carly Simon: The Making of 'You're So Vain'