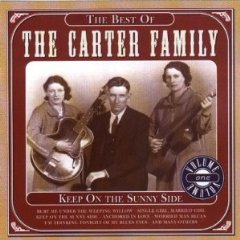 THE LEGEND that has grown up around Johnny Cash got its first in-person airing in Britain for three years at the Queen Elizabeth Hall on ...

FOR ONE reason or another, Johnny Cash has a rather fearsome image. It's been tempered in recent times by some of the songs he's written ...

The Carter Family: In The Shadow Of Clinch Mountain (Bear Family Records)

Review by Colin Escott, The Journal of Country Music, 2001

WITH ENOUGH PATIENCE and old catalogs, you could probably confirm that at least some Carter Family recordings have been available for almost the entire span ...

The Carter Family: Into The Valley

FIRST KILL YOUR HOG. SKIN IT, singe off the hairs and leave the hide to soften. Tug it over a round frame, whittle out a ...

RUTH UNGAR understands that a lot of people can't tell the difference between bluegrass and old-time music. Anytime they see a group with a fiddle ...