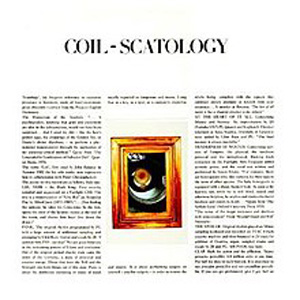 Coil: The Soil And Spoil Tactics Of Coil

WHEN YOU'RE up to your nose in shit, goes the Spaghetti wisdom, keep your mouth shut. ...

FROM THE provocative cover which displays a severed penis ejaculating capsules of Ecstasy to the way the title track wryly quotes Roy Orbison's 'In Dreams', ...

Profile and Interview by Ian Penman, Wire, The, April 2000

BILLED AS "a festival of plenty" by its curator Julian Cope, the two nights spent in the company of his various label mates, old mates ...

This Mortal Coil: A Final Report on Peter "Sleazy" Christopherson