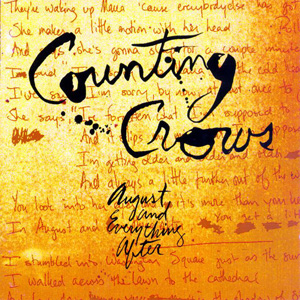 Counting Crows: Anatomy of a Hit

They weren't supposed to be a huge success, but Counting Crows had an amazing demo tape, an influential record company, good luck and great timing. ...

They've gone from COUNTING CROWS to counting dollars in the space of one album, but rook leader ADAM DURITZ still has to avoid the questions ...

ISN'T IT odd how some bands can carry on year after year, getting consistently good reviews, backed by major record company muscle, yet still end ...

BACKSTAGE AT the Shepherd's Bush Empire, Adam Duritz is opening a gift from a fan. Coasters. Normal ones, the sort you'd buy your dad for ...

IT'S A LAZY MONDAY NIGHT IN LOS ANGELES, AND A few blocks east of Beverly Hills an inconspicuous sign adorns a shadowy building, quietly proclaiming ...

A DUSTY, OCHRE ATLAS FROM THE THIRTIES. An old dictionary in two huge volumes complete with illustrations. A history of the Civil War in three ...

Singing in the Rain