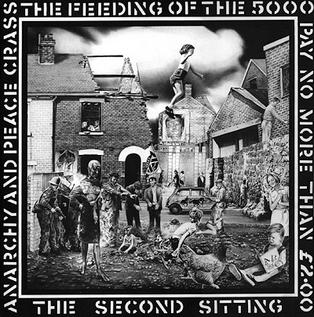 Crass: The Spirit of '76 is Alive and Well and Living in Ongar (in a Commune)

Crass: The Feeding Of The Five Thousand (Small Wonder, Weeny 2) **

Obscene oaths do not the revolution make ...

A SPARSELY attended benefit for the Anarchist Black Cross Cienfuegos Press; a slow night — both the cause and its supporting groups (safely) out of ...

IT SEEMS, at the present at any rate, there's no escaping The Crass Phenomenon. The "alternative charts" (the accurate few at that!) see them emerging ...

The Aesthetics of Anarchy: A Report from the House of Crass

THIS MUST be the dialectic of rock journalism. The talk is about whether there should be talks. Should Crass co-operate with The Face? ...

Two years ago CRASS couldn't decide whether to blow up the country or grow cabbages — fortunately for the Tory Tyrants, they chose the latter. ...

With Crass, Poison Girls and Flux in either retirement or a state of change, and Conflict in trouble, the anarcho-punk movement is in tatters. STEVEN ...

IF ANY GROUP seem wholly inappropriate for CD repackaging, then Crass are it, being eight admitted non-musicians who used snarl-toothed punk music as a vehicle ...

Crass: Where Are They Now?

THE SPIN Alternative Record Guide wrote that Crass were "probably the first rock band whose liner notes are not only indispensable, but often better reading ...

THE SPIN Alternative Record Guide wrote that Crass were "probably the first rock band whose liner notes are not only indispensable, but often better reading ...