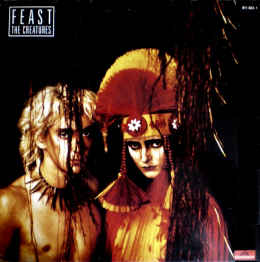 Is it true that you split the Banshees because the Sex Pistols reformed? ...

Deep in the jungle, something stirs. Strange drums beating, the cries of wild animals, a ghostly chanting sound...This, says lan Birch, can only mean one ...

The Creatures: Love At First Bite

Interview by Kris Needs, Flexipop!, May 1983

Deep in the bamboo forests of Hawaii it was mosquito against THE CREATURES while SIOUXSIE and BUDGIE cooked up a vinyl feast. KRIS NEEDS took ...

All Creatures Great and Small

Profile and Interview by Richard Cook, New Musical Express, 14 May 1983

WHAT HAS HAPPENED TO THE BANSHEES AND WHO ARE THE CREATURES? WELL, THE WATERMARKS ARE SIMILAR WITH IMAGES OF THE DIABOLIC, THE FANTASTIC AND THE ...

Siouxsie Sioux: Mellowing of a Banshee

Interview by Simon Reynolds, Observer, The, 1990

From her punk beginnings as style terrorist through her early Eighties reign as godmother of 'Goth' to the almost motherly figure she now presents, Siouxsie's ...

Siouxsie Sioux and fellow Banshee, Budgie, travel to Spain and out bounces Boomerang, the long-awaited second album from the duo's second identity. ...

SIOUXSIE AND THE Banshees have carried the can for all manner of goth-related crimes, from walking-corpse fashions to minor chord musical misanthropy. It's a wonder ...

Interview by Paul Mathur, This is not Retro, May 2002

I GUESS THE OBVIOUS QUESTION IS WHY ARE THE BANSHEES BACK, AND HOW DID THAT COME ABOUT? ...