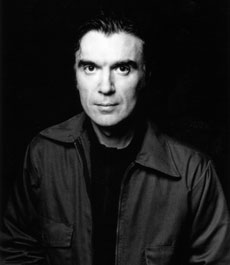 AN INCONGRUOUSLY large stage dominates the tiny park which is the setting for a one-day festival at Leicester's De Montfort Hall. As two risers are ...

The Talking Heads frontman on his film True Stories: about the meaning of Texas; conspiracy theories; yuppies and generational attitudes; the band's uneasiness with the film and soundtrack album; New York v the rest of the USA, and the meaning of cities.

Profile and Interview by Roy Trakin, Time Out, 28 November 1980

CENTRAL PARK, end of summer, 1980. The Talking Heads are playing to a crowd of over 5000 people who are literally overflowing a converted ice-skating ...

Brian Eno, David Byrne: My Life In The Bush Of Ghosts (Sire)

"You see, the problem is that people, particularly people who write, assume that the meaning of a song is vested in the lyrics. To me ...

FOR SOMEONE WITH such an aversion to limelight, fame and wild applause, David Byrne certainly puts himself about a bit. Ever since he formed Talking ...

The True Story of David Byrne

Profile and Interview by Steve Turner, Mail On Sunday, 1986

THERE'S SOMETHING faintly forbidding about David Byrne. Oh, he's friendly enough, sitting over the table of a discreet suite at Blake's Hotel in Kensington for ...

David Byrne: A Talking Head's Guide To The Big Country

COMING SOON to a cinema near you is one of this year's funniest yet most thought-provoking films. It is called True Stories, and is a ...

THE LAST TIME we saw David Byrne on the big screen, he was herky-jerking his way through a Talking Heads concert, doing his chaotic, turkey-necked, ...

EVEN BEFORE THE safety-curtain rose to reveal David Byrne sitting on a tree stump, there were some willing highlights. ...

NOT FOR nothing has New York been labelled "the first Third World city in a First World country." ...

DESPITE DAVID Byrne's beaver-like activities over the last few years, his persona and his work have gradually been losing much of their old allure. Perhaps ...

David Byrne: A Composer of Pleasure

Profile and Interview by Steve Turner, The Times, 1 December 1989

What do you think you are best at? David Byrne, neat in a blue button-down collar shirt and college athlete’s haircut, looks nervously into the ...

Although embarrassed at being hailed a "cultural ambassador", David Byrne has temporarily put Talking Heads on hold to step out with his 14-piece Latin big ...

NO DOUBT about it, the musical flavor of the week is Latin/Brazilian — even Paul Simon's recording an album of Brazilian music. It figures that ...

David Byrne: From Ur to L.A. and back again

In performance, and as the 'compere' in his film True Stories, David Byrne comes across as the epitome of Wasp uptightness, nervy and ill at ...

If you should bump into David Byrne on his forthcoming world tour, for God's sake don't mention the word "renaissance". Talking Heads are no more, ...

"LOOKING AT old videos of Talking Heads," says David Byrne, "it's like three normal kids backing up this maniac — three people who have their ...

PACKED WITH ALL MANNER of musical invention, oddball observations and joyous pop nonsense, Uh-Oh is by some way David Byrne's most commercial – and enjoyable ...

DAVID BYRNE has always enjoyed looking at the globe from the most unusual perspectives. He used to draw ephemeral pictures of the States on an ...

Interview by Phil Sutcliffe, Q, May 1992

For years the frontman of Talking Heads, David Byrne has emerged as a solo artist now – but his newest album shares the same off-beat ...

Head boy's follow-up to 1994's David Byrne finds him working with a variety of producers, including DJ Hahn Rowe, The Black Cat Orchestra and Morcheeba. ...

The former Talking Head gets comfortable with his outsider status ...

The King of Afropea: David Byrne

"Isn't this where the Profumo thing started?" someone asks. We're soaking up the seedy mock-opulence of The Eve Club on Regent Street and, for the ...

David Byrne: "Therapy is like a lobotomy. Who wants to have all their edges shaved off?"

Report and Interview by Ian Gittins, The Guardian, 27 April 2001

David Byrne: How the Talking Head learnt to Sing from the Heart

David Byrne, former leader of the Talking Heads and a man whose life's work has been wrapped in irony and knowingness, has made an album ...

NOT far from David Byrne's London hotel, a fashion store is selling T-shirts bearing the logos of the Ramones and of CBGBs, the legendary New ...

David Byrne – whose funk-rock-art band Talking Heads brought New Wave into the mainstream a generation ago, and who has pursued his interests in rhythm-based ...

Ex-Talking Head – and the most cosmopolitan man in New York – continues his global luau. ...

Interview by Sylvie Simmons, MOJO, May 2004

The angular former Talking Heads frontman on love, war, the ariasof Verdi and Bizet, and the problems of "art by committee". ...

Q: AS A SOLO ARTIST you have worked with horn sections and now with string sections to color and embellish your songs. Aside ...

DAVID BYRNE KEEPS a small black diary on his bookcase, with 'DB – Idears' written on the spine in gold ink. Without rifling through its ...

The Importance Of Being David Byrne

I WAS IN ZURICH recently and found myself at the rather legendary Cabaret Voltaire. It was in that very same place, all the way back ...

IN NEW YORK CITY this summer, David Byrne is everywhere. His installation titled Playing the Building transformed the Battery Maritime Building into a giant musical ...

LIKE SOME KIND OF vaguely sinister religious cult, David Byrne and his band kicked off their latest British tour dressed in pristine white from head ...

The Business is an Exciting Mess: Brian Eno and David Byrne

DAVID BYRNE IS sitting outside the ladies parlour, upstairs at the Tampa theatre, one of the most spectacular 1920s movie palaces in the US, in ...

Profile and Interview by Stephen Dalton, The Times, 1 August 2009

THE SUN HAS just melted into the distant purple mountains on a sweltering Italian night when David Byrne starts speaking in tongues, throwing his arms ...

GIVEN THE VASTNESS of the subject, calling a treatise How Music Works seems intellectually arrogant, but it could also be seen as disarmingly frank, a ...

ALL THE SUPERLATIVES you've heard or read about David Byrne's American Utopia tour are true. ...