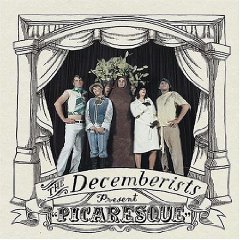 AN IMPORTANT DETAIL about Her Majesty the Decemberists—and one I'm venturing you won't read about in many other reviews of the album—is that there's a ...

THE SUCCESS of the Decemberists doesn't lie in the fact that each song that they write is a miniature world, intimately detailed and poetically rendered. ...

The Decemberists: The Crane Wife

THE DECEMBERISTS are the brainchild of Portland-based songwriter Colin Meloy. Meloy's interests include eighth century poetry, singing in a North American-oldie-worldie-British-accent and prog rock. If ...

The Decemberists: The Hazards Of Love

The Decemberists: The Changing of the Seasons

Profile and Interview by Laura Barton, The Guardian, 6 January 2011

A year ago, the Decemberists' Colin Meloy retreated to a house in the woods of northern Oregon. He tells Laura Barton about the effect it ...

The Decemberists — Reconstruction Of The Fables

COLIN MELOY grew up with "Paul Westerberg in one ear and Morrissey in the other". As hyperliterate frontman of The Decemberists, he has made rock ...

The Decemberists: Long Live The King

WITH THE DECEMBERISTS, it's a safe bet that somewhere between the post-Brit-folk of Fairport Convention and Morrissey's darkness, leader Colin Meloy will emerge with a ...

Report and Interview by Dorian Lynskey, The Guardian, 21 January 2015

Forget moon in June. Today's pop lyrics are written by Pulitzer-winning novelists. We talk to the writers muscling into pop – and the musicians flirting ...

EARLY IN THE Decemberists' show at the Merriweather Post Pavilion Thursday night, silver-suited lead singer Colin Meloy was explaining how one of his songs started ...

The Decemberists: I'll Be Your Girl

They could have gone into hyperdrive after the success of 2011's The King Is Dead. Instead, they receded from view for years and came back ...