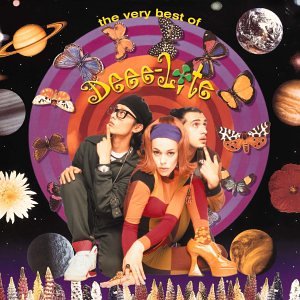 A Russian, a go-go dancer and a Japanese DJ is hardly the combination you'd expect to be making the most exciting dance sounds around but, as ANDREW ...

OUTRAGEOUS, COLOURFUL, Deee-Lite's tacky funky mush is a breathtaking pysche trip at the tail end of a summer that's been disappointing in terms of excess ...

New York City, 1990, and a head-on culture collision has thrown up one of the hottest, sweatiest groove machines since P Funk. It's a crayzee, ...

Simon Reynolds on '90s Zeitgeist with love from NY. ...

Pop music isn't all lying around the pool with GUNS N'ROSES, frugging with PRINCE and getting pissed (on) with the MONDAYS. Except, that is, in ...

Deee-Lite: The Message "Within"

There's a means in Deee-Lite's madness. Their new album, Infinity Within aims to touch hearts and minds whilst keeping their feet firmly on the dancefloor ...