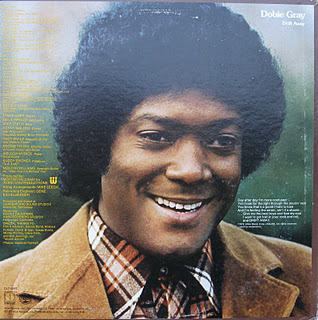 "I never did feel like a soul singer": from his youth in Texas to Nashville success, Dobie Gray talks about his crossover from R&B to country.

Dobie Gray Into The Acting Bag

THE "LEADER of the 'In' Crowd" came into The BEAT office this week and almost didn't get out. ...

IN THESE sceptered isles, of course, Dobie Gray is best known in the Northern disco circuit where 'The In Crowd', 'Out On The Floor' and ...

I COULDN'T find the name 'Dobie Gray' in any of the rock encyclopaedias. Presumably after 'The In Crowd' he became one of those half-forgotten names ...

THREE PLAYS and this record assumes the kind of easy familiarity usually expected from greatest hits albums. Eleven good cuts, and most of them potential ...

The Country Soul of Dobie Gray

CAN A WHITE man sing the blues? Now there's a cliché guaranteed to remove the enamel from a purist's teeth. Would say a purist: how ...

Dobie Gray: Back to Stay?

DOBIE GRAY'S making something like his third comeback, and seems reasonably pleased with the prospect. ...

IT IS, I GUESS, the third time around for Dobie Gray who, at the present moment, is stretched out full length on a bed on ...

Dobie Gray Is Driftin' Back

"PEOPLE TEND to think that if you're not on the top of the charts, you fall flat on your face," states Dobie Gray. "Well, I've ...