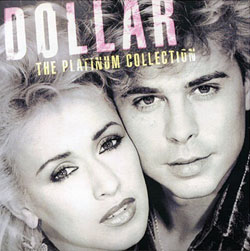 Working For The Swanky Dollar

Paul Morley meets the drunk white rabbit and a bully who looks in the mirror to ask why their narcissistic pop has suddenly been blessed with credibility ...

The Most Wanted Man In Pop: Trevor Horn

"Why does pop music have to be so naff?" asks TREVOR HORN, whose production work for Dollar, ABC and Spandau Ballet is an unequivocal answer ...

Dollar: Give Me Back My Art

There's two sides to Dollar: light and dead serious. They both makes cents to Ian Birch. ...

TREVOR HORN IS A ROARING SUCCESS. HE WAS BUGGLES, PLAYED WITH YES, GAVE DOLLAR THEIR HITS AND HAS NOW PRODUCED ABC AND THEIR DEBUT LP, ...

Where Are They Now? Dollar

Once they sat behind the gilt-inlaid desk of success, with the keys to the executive washroom; then, suddenly, they were "downsized". ...

Dollar's David Van Day continues to entertain — but not by singing ...