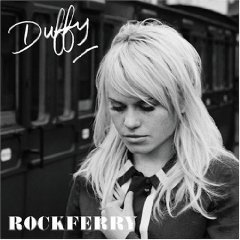 Adele and Duffy are products of the age of X Factor

DO YOU EVER get the feeling that the British music industry runs on a slightly unimaginative copycat pattern? ...

Who's better – Duffy or Adele?

The national topic of conversation has shifted from speculating on the weather to a more pressing subject: the search for this year's Amy Winehouse. ...

NORTH WALES siren Duffy is the latest of a formidable crop of female singer-songwriters to be overloaded with the desperate expectations of an industry in ...

BEHIND THE BLONDE BANGS, you get the feeling there might have been more than the odd moment of self-doubt for Duffy. You can almost see ...

The biggest-selling artist in Britain this year? That would be Wales' Aimee Duffy, sales of whose Rockferry album passed the million mark a few weeks ...

Growing up in north Wales, Aimée Ann Duffy dreamt of being a singing star. When success came suddenly, it brought adulation, awards and a call ...

Welsh songstress excels — with the help of Albert Hammond and The Roots, says Graeme Thomson ...