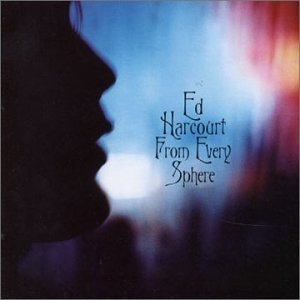 THE CROWD for One of Uncut's biggest Borders night so far are backing up from the DIY department into History. Some are still in line ...

THE SINGER-SONGWRITERLY hush of bookshops doesn't, it turns out, bring out the best in Ed Harcourt's combative soul. His recent Borders acoustic show may have ...

AFTER TAKING A healthy swig from what appeared to be a bottle of cheap red wine, Ed Harcourt became possessed. It was the culmination of ...

Ed Harcourt: From Every Sphere

Further helpings of articulate and soulful intensity from highly-acclaimed British singer-songwriter on the follow-up to his Mercury Prize-nominated debut from 2001, Here Be Monsters ...

Ed Harcourt: From Every Sphere

IF THEY DON'T write songs like they used to, no one told Ed Harcourt. Before the 26-year-old former chef put out his first album — ...

ED HARCOURT has always been a solo artist, but tonight, he seems even more alone, maybe even lonely. ...

Interview by Chris Roberts, Uncut, May 2003

His new album's won critical raves on every front,  so why is Ed Harcourt so spooked? ...

Third set from Sussex singer-songwriter and follow-up to last year’s acclaimed From Every Sphere. ...

Singer, songwriter, pianist and all round bon viveur Ed Harcourt talks to Wyndham Wallace about his favourite records. ...

It's taken seven albums, visions of the child catcher and Billy Bunter's reflection in the mirror, but the English songwriter has finally refound his voice ...