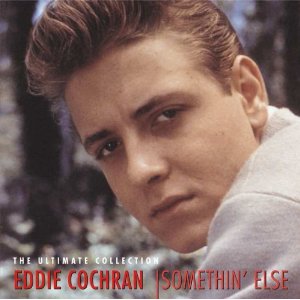 Gene Vincent's injuries are not serious ...

EDDIE COCHRAN'S chart entry 'My Way' is only one of several previously unissued discs the U.S. star left behind after his death in April, 1960. ...

Eddie Cochran: He Shouldn't have Used The Car 'Cos He'd Been Workin' Late

But he did – and, fourteen years ago this Easter, EDDIE COCHRAN died of multiple injuries when a tyre blew out. MICK FARREN traces the ...

I SUPPOSE WITH Showaddywaddy up in the singles chart with 'Three Steps to Heaven', and the 17-year-old version of 'C'mon Everybody' once again bubbling under ...

PHIL SPECTOR, for one, is of the opinion that Colonel Parker used to hypnotise Elvis into singing rhinoceros shit like 'Viva Las Vegas' and 'Girls ...

He was a tough-looking man, hefty square shoulders above turned-up sleeves and keg fists; the voice was an Oklahoman baritone that could hiccough with determination ...