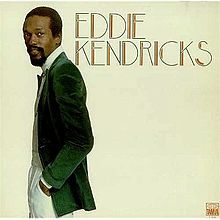 Eddie Kendricks: A Temptation No More

A MOTOWN News Release, dated March 19, 1971, confirmed something that we had been hearing about for several weeks – namely that Eddie Kendricks, lead ...

2008 intro: Eddie Kendricks had enjoyed critical acclaim with his groundbreaking 1972 People, Hold On album. The former Temptation had to experience a commercial mainstream ...

When Temptation Got The Best Of Eddie Kendricks

IT'S A big decision quitting a world-famous group, especially when they're on top, and look like sitting pretty for a long while. So it was ...

Hot night at the Apollo ...

Eddie Kendricks: Success is a Temptation

IT TAKES a lot of courage to leave a successful group and go solo. Sitting on top of the American charts with the year's hottest ...

IF EVER an album was aptly titled it is the new Eddie Kendricks' Tamla set – The Hit Man. ...

TAMLA MOTOWN have dubbed him "The Hit Man" and it's no misnomer. For while 'Keep On Truckin'' is the only cut to have made the ...

Kendricks Tempts The Mind And Body

EDDIE KENDRICKS, I'm sorry to say, is not the man he used to be. Thirteen years ago he was one of the Temptations, and was ...

The Two Sides of Eddie Kendricks

There's the man who goes on stage to work and the guy off-stage who's just a member of the public. "It's important those two people ...