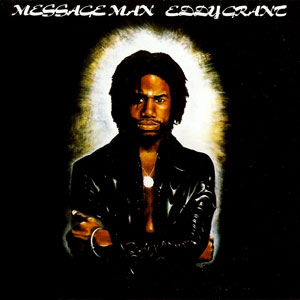 Eddy Grant talks about forming the Equals with school friends in Tottenham; their hits 'Baby Come Back' and 'Black Skin Blue Eyed Boys'; his heart attack, and leaving the band; contractual issues with manager Edward Kassner, and regaining his copyrights; building his own studio; dying his hair white; his solo albums, and hits 'Walking on Sunshine' and 'Living on the Front Line'; moving to Barbados and building his Blue Wave studio, and about his sporting heroes and friends.

THE INHABITANTS of the MM's Fleet Street HQ are pretty used by now to witnessing the more bizarre manifestations of Britain's pop scene. ...

How far can a black musician control his own destiny in white society? Surprise, surprise, not all the way, says the man in the front ...

EDDY EARNED his slot in my Militant Section by delivering this rap onstage: "As a black artist here in England I've seen it rough, and ...

Eddy Grant: Killer On The Rampage

HE'S A very admirable figure, is Eddy Grant; he's got the whole business sussed, sewn up, he really has. Each year he releases a few ...

Eddy Grant: A Reggae Popster Makes His Own Breaks

REMEMBER D.I.Y.? Remember all those fierce and earnest punk rockers who vowed to bypass the corporate monopoly and conquer the rapidly devolving Western world? It ...

Eddy Grant Does It California Style

I JUST GOT my current issue of Processed World ("The magazine with the bad attitude"), and it's a winner. Written by and for the shitheels ...

Eddy Come Back: Eddy Grant and the Equals

AS THE 1970S progressed, the keys to the buoyant Afro- funk recording industry were two of black London's biggest music-business movers-and-shakers, Eddy Grant and Aki ...