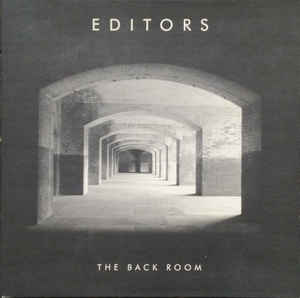 Editors: The Back Room

THE EDITORS' rapidly growing legion of fans sent the group's recent single, 'Munich', into the Top 30 — and by the time you read this, its ...

THE STUDENTS and indie cubs near the stage won't be unduly troubled by any feelings of dejà vu on this night. With formative musical memories ...

THEIR FRONTMAN is half of a celebrity couple and they're tipped to be as big as U2. But that doesn't mean Editors are happy. ...

Editors — You're holding the front page

LEFT ALONE IN EDITORS' dressing room for a couple of minutes, it's hard not to fear the worst. A well-thumbed copy of George Orwell's 1984 ...

Editors: We don't want to win the Mercury

Editors are poised to take over from Coldplay as the new masters of navel-gazing stadium rock. As they return to UK stages, they tell Paul ...

Live Review by Caroline Sullivan, The Guardian, 30 May 2007

TALK ABOUT ADVANCE WARNING — the first three songs of their set are called 'Bones', 'Bullets' and 'Blood', so nobody can claim to be surprised ...

Editors: An End Has a Start

THROUGHOUT 2005 there were few more ubiquitous young indie bands than Arcade Fire and Editors. Now, in 2007, both have been faced with the job ...

JOINING EDITORS backstage at a gig in Amsterdam, Dave Simpson tries to solve the riddle of the band's songs: how can misery sound this good? ...

Profile and Interview by Robin Eggar, The Sunday Times, 24 June 2007

THE TITLE OF the new Editors single, 'Smokers Outside the Hospital Doors', sums up the band's view of life. "The irony of someone having treatment ...

Editors: An End Has A Start

Aloof yet commercial, glacial but rich... Editors are an awful lot more than the Joy Division that never went disco. ...

THE FACT THAT THIS was the opening night of Birmingham's new Academy meant there was already a buzz. There was added excitement because Editors are ...