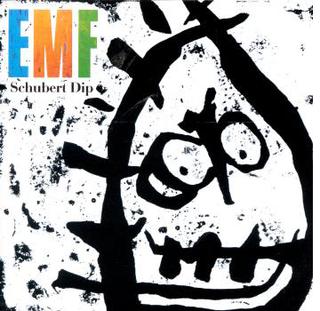 THE FOREST OF DEAN in rural Gloucestershire is not the sort of place you would call "the home of very noisy rock 'n' roll"; this ...

EMF: An Unbelievable Rise To Fame

EMF ARE YOUNG, GOOD-LOOKING, LOUD AND HAVE BAD ATTITUDES. THEY ARE ALSO AMAZINGLY SUCCESSFUL. IS IT DOWN TO HYPE OR TALENT? BETTY PAGE INVESTIGATES. ...

LONDON — The trance-dance rhythms and euphoric aura of acid house music have drastically altered the outlook and aspirations of most British rock groups. ...

The thin line between accessibility and credibility ...

EMF: Sombrero Guys Have All the Luck

EMF: I've Got You Under My Foreskin

Once they were young, pretty and sexy pop stars riding on the frenzied rock-shag monster with a diet of dangerous drugs and sex. Now EMF ...

EMF have left behind their teeny-bop image for something more meaningful, writes Caitlin Moran ...

Report and Interview by Jim Sullivan, Boston Globe, The, 19 February 1993

THE SCRUFFY-LOOKING band on stage is churning out a hard, propulsive groove, a sample of Andrew Dice Clay's voice is bellowing out "Oh!" to punctuate ...

EMF: In Knob We Trust

These Animal Men, eat your heart out! Beatbox popsters EMF were Number One in America when their average age was 20, they were on the ...

EMF are famous for putting citrus fruits up their foreskins and getting drunk. For some peculiar reason, DAVID BENNUN doesn't think this, in itself, is ...