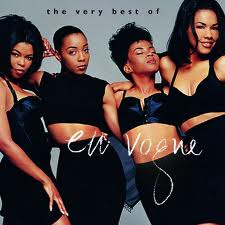 Can girl groups be taken seriously and is there brains behind the beauty? Tough R&B hitmakers EN VOGUE put the politics into pop and make ...

Having secured an almost unprecedented acceptance with their first LP, En Vogue intend to continue their high flying success story ...

Jeff Lorez travels to Oakland, California to talk to writer/producers Foster & McElory about the apparent True Brit in their new "Funky Divas" album for En Vogue — and to the ...

Harmony Singing: You Have A Lovely Singing Voice

Three years ago it had all but disappeared beneath the deluge of hard rap and technological beats. Now, from the choreographed trouser arousal of En ...

Quiet Storm: The Year In R&B

While no one was looking, a new kind of R&B became the dominant force in pop music. And still it gets no respect. ...

En Vogue does not mean fashionable

Profile and Interview by Paul Sexton, The Times, 13 June 1997

Paul Sexton meets the trio that found success by the old-fashioned route — via talent, hard work, charm, that sort of stuff ...

They are the quite spicy girls. A long time ago, they were manufactured by a pair of svengalis. Since then, they've had lorryloads of hits, ...