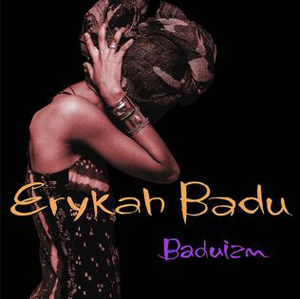 PERHAPS THE first thing you notice about Erykah Badu is her uncanny vocal similarity to Billie Holiday – from the very beginning of Baduizm, Badu's ...

SOMEHOW "SOUL" music lives on, clinging to life in the midst of the coldest, meanest materialism. Straight outta Brooklyn came two of the heirs to ...

I HAVE SEEN Bowie atop a giant glass spider and U2 stuck inside a lemon, but I cannot recall an entrance like Erykah Badu's. ...

SHE WAS QUEEN of the head-wrap set. A generation of young black folks trying to navigate the pitfalls of cultural negation in an era when ...

IN HER BILLOWING WHITE ROBES, with hair piled into a gigantic afro mohican, Erykah Badu looks incandescent and remarkable against the night sky at this ...

IN 1997, from out of nowhere, Erykah Badu delivered one of the most significant albums of modern R&B. ...

IT'S BEEN MORE THAN A DECADE since a songstress from Dallas with her hair wrapped in a Nefertiti scarf first unleashed her boho soul upon ...

ERYKAH BADU HERSELF has explained that if Return of the Ankh and its predecessor, 2008's sublime New Amerykah: Part One (Fourth World War), were two ...

THE LOT OF AN ERYKAH BADU fan isn't always a happy one. In the long queue outside Brixton Academy, two women are indignantly discussing the ...

"I WILL NOT commit nor will I submit to musical genocide," Gregory Porter sang Saturday afternoon at the 11th annual Summer Spirit Festival.  ...